The post-bankruptcy era of the El Cerrito High School Music Program began in the fall of 1991. The program was faced with many challenges, including dwindling enrollments and class offerings. After losing Mr. Yonemura’s replacement nine weeks into the new school year, Bart Cummings was hired to finish the school year as the director of the program. Mr. Cummings was faced with the leanest music program in over four decades, with declining enrollment due largely to budgetary cuts and student drop out. The program lost its second level jazz band as well as the choir program. Despite these challenges, the Symphonic Band and the Concert Band, as well as the now nationally recognized Jazz Ensemble, were able to forge ahead and continue the tradition of musical excellence at ECHS.

After Mr. Cummings left ECHS after only year, Dan Buegeleisen became the new Director of Bands at ECHS in the fall of 1992. Mr. Buegeleisen’s tenure at ECHS was one of change and transition. With ECHS no longer being an arts magnet school, and with a changing school demographic, the interest in the music program was dwindling. Though the numbers for the Symphonic Band and the Jazz Ensemble remained strong, the Concert Band began to lose enrollments. Although these low numbers were discouraging from the perspective of interest in the program, the students of that era left ECHS with the same sense of pride and accomplishment as their predecessors. The Gaucho Marching Band remained a strong part of the culture at El Cerrito High School, averaging 50–60 musicians during Mr. Buegeleisen’s tenure. Under his direction, the Symphonic Band was the recipient of three consecutive Unanimous Superior Awards at CMEA Band Festivals in 1995, 1996, and 1997, a streak that had not taken place since the Marv Nelson era.

Mr. Buegeleisen left El Cerrito High School in the spring of 1997. Teaching responsibilities for the three remaining classes in the program were divided among three teachers. The Symphonic Band was led by former ECHS band director Paul Yonemura; the Concert Band was led by Rand Clark, ECHS alum and son of former director Terry Clark; and Tom Fuglestad, the current band director at Pinole Middle School, led the Jazz Ensemble. These three teachers helped maintain the program during a very challenging time while the search for a full-time music teacher took place. In the spring of 1998, under the direction of Mr. Yonemura, the Symphonic Band received a Unanimous Superior Award at the CMEA Band Festival in spring of 1998, marking the Symphonic Band’s fourth consecutive Unanimous Superior Award.

The following year, in the fall of 1998, Jesse Leyva was hired as the Director of Bands at ECHS. During Mr. Leyva’s three-year tenure, the program saw a rebirth of the ECHS band tradition. Due to his commitment to the program, coupled with a strong feeder program at Portola Middle School (under the direction of former ECHS band director Paul Yonemura), the number of music students participating in the music program began to quickly increase, seeing its highest numbers in over a decade. This resulted in an expansion to the program that included, in the fall of 2000, the addition of a second jazz band back into the program. Under Mr. Leyva’s direction, the Symphonic Band received consecutive Unanimous Superior Awards in 2000 and 2001 at the CMEA Band Festival. In 2001, the Jazz Ensemble returned to the Reno Jazz Festival for the first time in over thirty years. Mr. Leyva left El Cerrito High School in the spring of 2001 to pursue a Master’s degree in Instrumental Conducting at San José State University and later a Doctorate from Arizona State University.

Moving into the new millennium, the program would see four director changes over the course of eight years. In 2001, Brian Barfield joined the ECHS faculty. During Mr. Barfield’s two-year tenure the program experienced its highest numbers since 1978. Mr. Barfield’s tenure included many firsts for the program, including the Jazz Ensemble’s first performance at Yoshi’s Jazz Club in Oakland. Performing at Yoshi’s has since become an annual event for the ECHS jazz ensembles. The Jazz Ensemble also gained notoriety in 2002 and 2003 by placing third and second, respectively, in the C division at the Reno Jazz Festival. Mr. Barfield’s tenure ended abruptly in spring 2003 when the school district, once again facing budget cuts, was forced to lay off most of its music teachers. 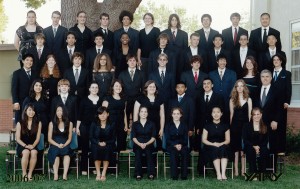 In the fall of 2003, saxophonist Roland Brown began his five-year tenure at the high school. Mr. Brown’s tenure coincided with the 2005 demolition of the original school buildings, which many viewed as the end of an era at El Cerrito High. During this time of transition, the school was placed on a temporary campus (located on the soccer and baseball fields), the band room was housed in a portable classroom, and the Music Department had no performance venue. Mr. Brown was instrumental in building community relationships with local organizations, leading to performance opportunities at venues such as the Contra Costa Civic Theatre, Harding Elementary School Theatre, and Ashkenaz in Berkeley. He was also a key member of the team that researched and designed the new Performing Arts Center at ECHS.

Under his direction, the program maintained a busy performance and festival schedule that included several award-winning performances. In 2006, the Gaucho Marching Band attended its first competition in over forty years when it attended the Santa Cruz Band Review. Mr. Brown also helped bring notoriety to the jazz program with first place finishes at the Reno Jazz Festival (“B” division) in 2005 and 2007, as well as annual performances at Yoshi’s Jazz Club in Oakland.

Mr. Brown ended his tenure at El Cerrito High School following the 2007-08 school year. Following Mr. Brown’s departure the program was passed on to Andrew Ting. His brief stay during the 2008–09 school year coincided with the opening (in January, 2009) of the new El Cerrito High School campus, including the Performing Arts Theater. The music program brought positive attention to the school by placing first in the AA division at the Folsom Jazz Festival that year.