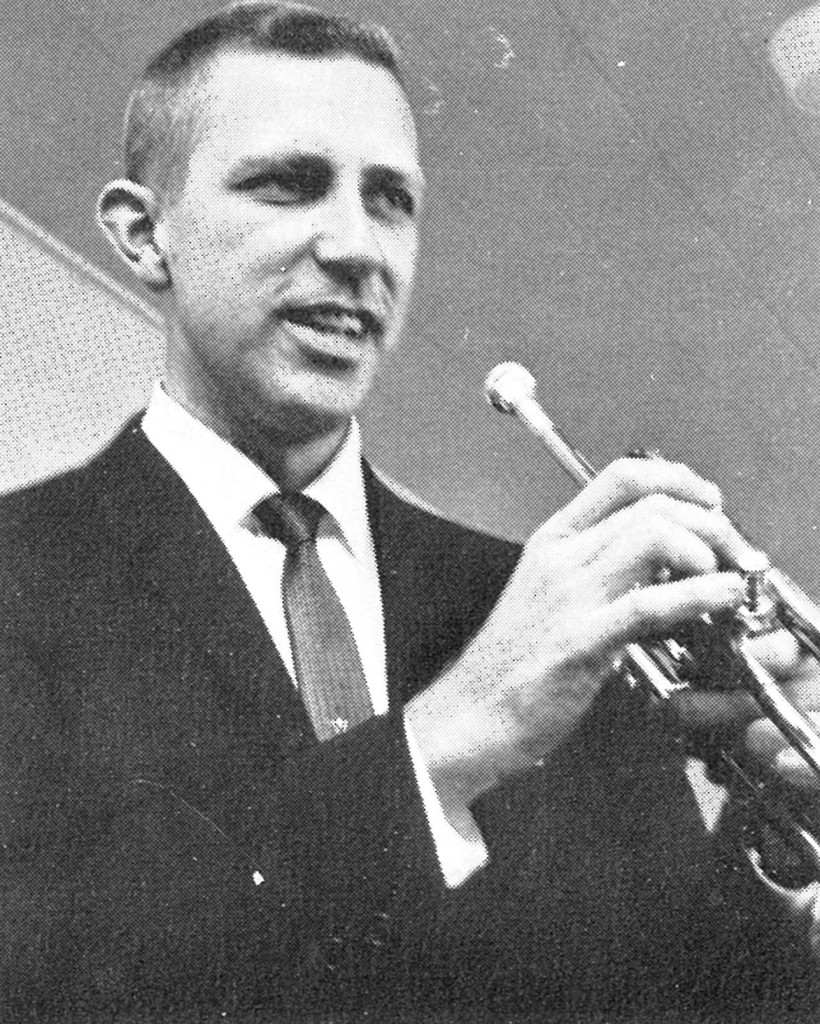 In the fall of 1962, following Mr. Overholtzer’s departure, professional trumpeter Marvin Nelson joined the faculty at El Cerrito High School. Though Mr. Nelson only taught at El Cerrito High School for five years, his experience as a professional musician, high musical standards, and his passion for music and teaching helped propel the program to new levels of success.

By the beginning of Mr. Nelson’s tenure, El Cerrito High School had long established itself as having one of the premiere marching bands in the state. In 1963, Mr. Nelson instituted the first all-volunteer Marching Band. Under his direction, the Marching Band continued to thrive and build on the success the band had earned under the direction of Mr. Overholtzer.

The fall of 1965 was a busy year for the Gaucho Marching Band and a pivotal year for the program. On October 2, the Marching Band was invited to represent the University of Kansas at Memorial Stadium at UC Berkeley. Later that month, on October 24, the band was also invited to perform a halftime show at the Oakland Coliseum for the Raiders vs. Miami Dolphins game. This was the first of three consecutive performances by the Marching Band at an Oakland Raiders game. (The band would also perform on October 6, 1966, during Mr. Nelson’s final year at ECHS and again in 1967.) This game was nationally televised and while union rules would not allow the band to play in the stands during the game, the band was allowed to perform a thirteen-minute halftime show. The theme for the halftime show was “Circus Daze,” and after the performance of the 64-member Marching Band, the audience gave them a five-minute standing ovation!

In the fall of 1965 the Concert Jazz Band (later renamed Jazz Ensemble) was added to the ECHS music curriculum. While the El Cerrito High School Marching Band, Wind Ensemble, Concert Band and Orchestra gained wide notoriety and accolades under Mr. Nelson’s direction, establishing the jazz band was arguably his greatest contribution to the school. Although jazz bands (known then as “stage bands”) were starting to slowly become integrated into the music curriculum at many schools in the country, El Cerrito High School was one of the first schools in the Richmond Unified School District to formally establish a jazz band in the core music curriculum. 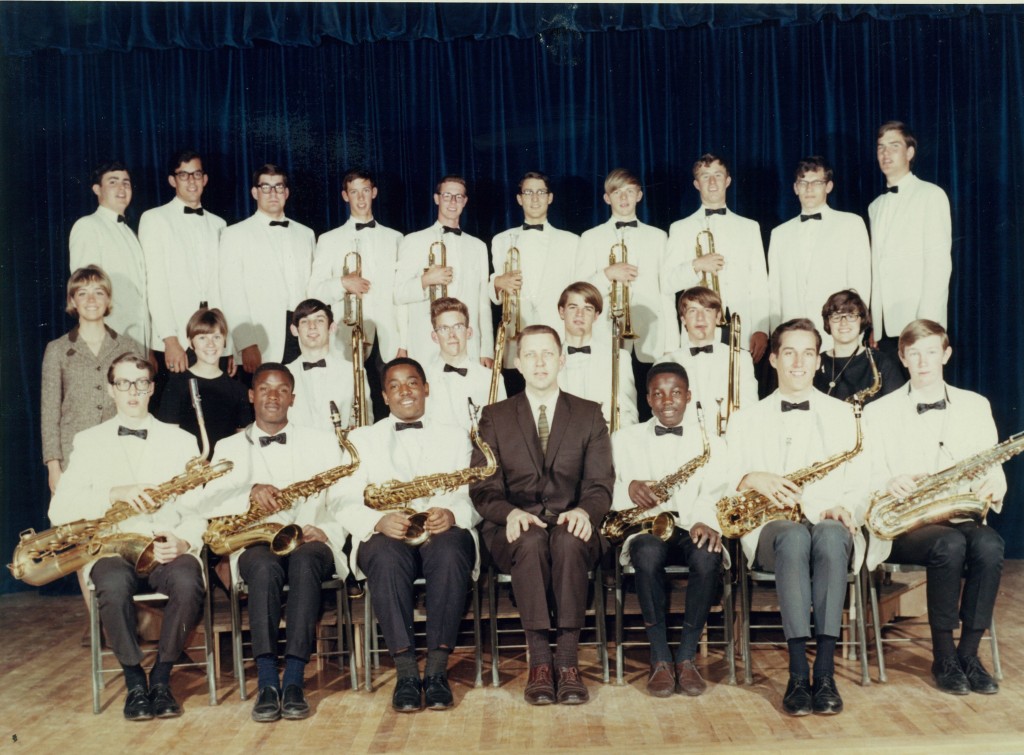 Enjoying success early on, the jazz band quickly established itself as one of the premiere groups in the El Cerrito High School Music Program. In the fall of 1965, the then young Concert Jazz Band performed alongside renowned jazz vibraphonist Cal Tjader. This concert was a fundraiser for the band’s first trip to the Reno Jazz Festival (then known as the University of Nevada Stage Band Festival) in the spring semester of 1966. That year, the Concert Jazz Band was ranked in the top four ensembles in the AAA division at the festival.

The growth of the jazz program continued the following school year (1966–67) with the addition of a second Jazz Band. During its first year, the Jazz Band earned second place at the Sacramento Jazz Festival, third place at the Reno Jazz Festival, and a Unanimous Superior Award at the CMEA Stage Band Festival at South San Francisco High School.

In the fall of 1967, Mr. Nelson left El Cerrito High School to become Director of Bands at Cal State Hayward (now known as CSU East Bay). He retired from Cal State Hayward in 1988 but continued to teach there part-time through 1992. 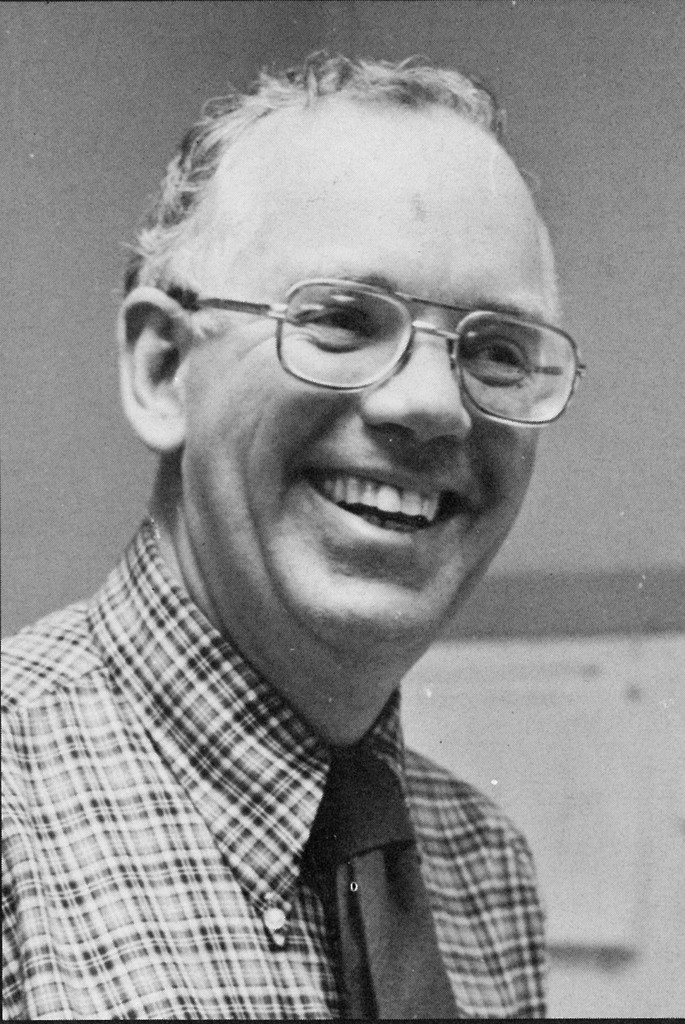 After Mr. Nelson’s departure in 1967, organist Richard Emmons joined the ECHS faculty as the new director of the Instrumental Music Program. Mr. Emmons’ tenure at El Cerrito High School was one of growth and expansion. He was the first director to teach an entire school year in the newly built performing arts building, which opened in the spring of 1967. This new facility replaced the annex building, which housed the band and choir rooms.

When Mr. Emmons first arrived the instrumental program consisted of the Symphonic Band, Concert Band, Jazz Band, and Orchestra. At that time ECHS was the only high school in the Richmond School District that still had an orchestra. Having an orchestra was one of the primary reasons Mr. Emmons was drawn to El Cerrito High School over other schools in the district.

As the level of musicianship continued to grow within the Music Program so did the overall enrollment at the school. In 1973, after over 25 years of serving grades ten through twelve, El Cerrito High School welcomed their first ninth grade class. This marked an important change in the make up of Portola Junior High School, as well, which began that same term to serve only seventh and eighth grade classes.

This growth in student population began a new chapter in the history of the ECHS Music Program as it allowed the program to expand its course offerings. This expansion began with the hiring of a second instrumental music teacher. In fall of 1973, Terry Clark was hired as the second instrumental music teacher at ECHS. The music course offerings at El Cerrito High School expanded to include two guitar classes and an introductory band class. Beginning that year Mr. Emmons and Mr. Clark split the responsibilities of teaching all of the instrumental music courses. Mr. Emmons was responsible for teaching the Symphonic Band, Marching Band, Orchestra, Advanced Guitar, and Beginning Guitar. Mr. Clark was in charge of the Concert Band, Jazz Ensemble, and Intro to Band class. The following year Mr. Clark also took on the A Cappella Choir and later, in 1975, helped the choir program expand to include a jazz choir. The expansion of the program also included the addition of a second jazz band in the 1974–75 school year.

A highlight for the Music Department during the 1970s included the annual musicals, which brought together the drama, choral, and instrumental students to put on productions including Carousel, Finian’s Rainbow, Kiss Me Kate, Oliver, and South Pacific. In 1976, the school presented George M!–a musical that, in keeping with the theme of the U.S. bicentennial, offered a patriotic message. According to Mr. Emmons, that year local TV station KGO channel 7 hosted a program showcasing local high school musicians, and El Cerrito High School was selected to present scenes from George M!.

In 1976, the Gaucho Band was invited to perform at Disneyland’s “America on Parade,” which celebrated America’s bicentennial. “America on Parade” ran from June 14, 1975 through September 6, 1976 at Disneyland (as well as Disney World). The parade, which ran the length of the park, included floats with patriotic themes as well as performances by marching bands from across the state. 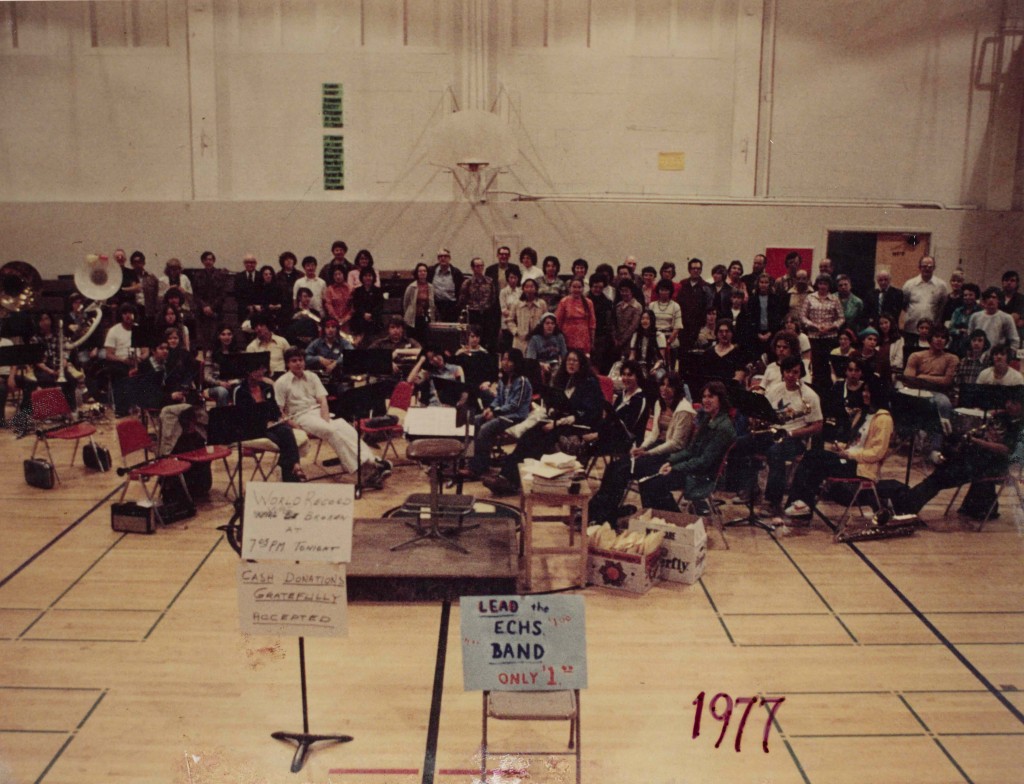 The following year, the band held its first play-a-thon, with the goal of setting a record in the Guinness Book of World Records. Mr. Emmons recalls that world-record setting event: “The goal was 80 hours and was done on a weekend when Friday was a holiday so it could go from Thursday afternoon through Sunday evening. The band took over the gym and had rooms for sleeping and eating (thanks to the band parents for providing meals). The rules stated that 75% of the group must be playing at any time and that a break may be taken for 10 minutes each hour. We pulled out all of the easy music books that could be played without rehearsal and had at it. We offered the opportunity for persons to guest conduct the band on a number, and had many who did so.” The record was set at eighty hours and four minutes. The local newspaper did a feature with pictures of the event, which was picked up by the Associated Press and put on their wire service. Said Mr. Emmons, “This went world-wide and not long after we got a copy of the English newspaper in Hong Kong with a picture of the El Cerrito Band on the front page!”

The 1976–77 school year was an important year for the program not only because of its world-record setting marathon, but because of the growth taking place both musically and in class numbers. For the first time in the program’s history, a third band—Concert Band II—was added to the program. During this time the jazz program was also gaining recognition at festivals and competitions throughout the state. At the Chaffey College Jazz Festival, the Jazz Ensemble took second place in their division, as well as third place overall out of over 100 bands. The Jazz Combo also placed first in the combo division.  The Jazz Ensemble had become a regular at the Reno Jazz Festival. However, the 1976–77 Jazz Ensemble and Jazz Combo were the first jazz groups from El Cerrito High School to be selected as finalists to compete at the Monterey Jazz Festival High School Competition.