El Cerrito High School Bands have been an integral part of the school and community since the school opened on January 6, 1941. The first director of the El Cerrito High School Instrumental Music Program was Adrian Newman. A graduate of San Francisco State University, Mr. Newman helped shape the program during its formative years. In the 1940s and into the 1950s the program consisted of one band and one orchestra. During the early years the ensembles were made up primarily of 7th and 8th graders as El Cerrito High School initially opened as a junior high school and remained a junior-senior high school until the opening of Portola Junior High School in the early 1950s.

At the end of the school’s first full school year (May of 1942), Mr. Newman enlisted in the U.S. Navy. George Stewart was hired to teach the Band and Orchestra classes (as well as gym classes) after Mr. Newman’s departure. His tenure only lasted for a year and a half, as Mr. Newman—who was honorably discharged from the Navy in the fall of 1943 following a medical operation—returned to ECHS as Music Director in February 1944.

Mr. Newman’s return was publicized and met with much enthusiasm. It was after Mr. Newman’s return that the program began to see substantial growth, both in terms of enrollment and in the number of musical ensembles and clubs offered by the school. The growth of the program was partly due to the increase in student population in the mid-1940s. This increase led to the 1946 construction of the Annex, a building that housed the band and choir rooms (rooms 62 and 63) on the east side of campus.

By 1945, Mr. Newman had established a marching band (who made its debut in the fall of 1944 when ECHS was admitted to the ACAL), and two dance bands made up of 12 band members each that performed at all school dances and assemblies. The second dance band, the Junior Swing Band, was created as a training ground for the already established dance band known as the Sophisticated Swingers. In addition to the dance bands, chamber music ensembles and specialty groups such as the Circus Band started to become popular at the time.

Among his many contributions to the music program, Mr. Newman is also credited for writing El Cerrito High School’s Hymn, All Hail. It remains ECHS’s school hymn to this day and has been performed at all ECHS graduations since the the 1940s. 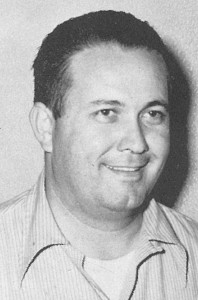 In the spring of 1950, Adrian Newman left ECHS to join the music faculty at Contra Costa Community College in the spring of 1950. Following Adrian Newman’s departure, John Overholtzer, a UCLA graduate, joined the ECHS faculty as the new Director of Bands. Mr. Overholtzer brought with him excitement and fresh energy for the ECHS Music Program. Under his direction, the program began gaining recognition at the local, state, and national levels as one of the premier high school music programs in California.

The program’s development during this era proved to be a golden age for music at El Cerrito High School. During his second year he led the Band and Orchestra to their first of many Unanimous Superior Awards at the CMEA (California Music Educators Association) State Music Festival. The El Cerrito High School Band continued to serve as the school’s Concert Band throughout the school year as well as the school’s Marching Band during the fall season. The term “Gaucho Band,” coined during the 1950s, is still used today.

During Mr. Overholtzer’s tenure the Wind Ensemble and Band received Unanimous Superior Awards at the 1958 Golden Empire Music Festival, in addition to other Unanimous Superior Awards at the CMEA State Band and Orchestra Festivals in 1951, 1952, 1953, 1956, 1959, and 1962. On April 16, 1962, Mr. Overholtzer led the Wind Ensemble in their first (and only) performance at the CMEA State Convention.

Although the Wind Ensemble, Band and Orchestra received multiple awards during Mr. Overholtzer’s 12-year tenure, the Gaucho Band, in particular, was considered among the finest groups of its kind in the state. Among several other awards, the Gaucho Band received first place awards at the Contra Costa County Fair Parade in 1952, the 1953 Eighth Annual Berkeley Football Festival, and at Richmond’s Golden Anniversary in 1955.

The Gaucho Band was often called upon to represent universities from throughout the country at the University of California’s Memorial Stadium in Berkeley. On October 3, 1953, the band was asked to represent the then sixth ranked Ohio State University at the Cal-Ohio State game at Memorial Stadium. This was one of the only nationally televised collegiate football games that year and there are claims that the Gaucho Band was the first high school band to be nationally televised at a college football game.

This game is important to the history of El Cerrito High School as it was this event that brought to ECHS its well known school fight song, Down the Field. Prior to this game ECHS did not have a fight song of its own. After representing Ohio State, the Gaucho Band adopted (and modified) Ohio State’s iconic fight song, Across the Field. Believed to have been written by Mr. Overholtzer, Down the Field has become an important asset to the school culture at El Cerrito High School and is unique in the Bay Area as being one of the only fight songs not associated with a local university.

The 1961–62 school year was arguably the most successful year for the Gaucho Band and also Mr. Overholtzer’s final year at ECHS. That year the 96-member Gaucho Band received a first place award in numerous competitions, including the Berkeley Parade of Lights, the Santa Rosa Rose Festival Parade, the California State Fair, the University of the Pacific Homecoming Parade in Stockton, and the Lions National Convention Parade in San Francisco.

During Mr. Overholtzer’s final year at ECHS (1962), the Gaucho Band was selected to compete in the 24th Annual North Iowa Band Festival in Mason City, Iowa (June 17–19). That year the national high school marching contest in Mason City served as a backdrop for the world premiere of the movie The Music Man, which was based on the hit Broadway musical. To introduce the movie to the world, festival organizers expanded the 1962 event to include a contest to honor the nation’s best high school marching bands. The contest was also known as the “Music Man National Competition.” Only one band from each of the thirty states represented was chosen to compete, with the winner appearing in the film’s promotions. ECHS was chosen to represent California. Among the thirty bands that competed in the marching competition, the Gaucho Band took first place!

Mr. Overholtzer left El Cerrito High School at the end of the 1961–62 school year. He remained in the Richmond Unified School District in various capacities after his departure.